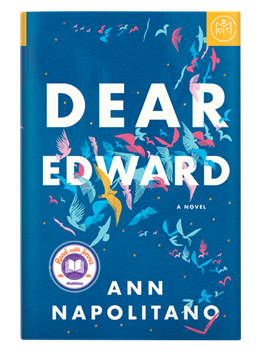 Unpopular opinion: I am rating this novel a 3.5 star rating.
Something was missing in this story. I did not connect to it. I felt emotionally withdrawn from the characters. I think there were TOO many characters in this novel to really get a grip. They jumped from character to character. I felt not connected to any of them and their stories were just underwhelming.
The plot is complex. A boy survives a plane crash that kills everyone else on board which includes his mother, father and brother. He then deals with the aftermath of grief and media. Edward is a well-developed character who has PTSD and depression. This part of the novel, I read and held some of my interest. He starts coming of age in the novel and dealing with his life as a teenager but also grief. Then the story flips to flashbacks on the plane. The plot focuses on other people on the plane than the crash itself. I think if it focused on people on the plane a little less and more of a story of a family as the plane crashed in the flashbacks, it would have been a better story for me. We do not learn nearly enough about his family but more about perfect strangers in the novel. Even though, his parents and brother’s death not only affected him but also his Aunt and Uncle who he is living with. I would have also liked to see more of their story as well.

I had a major issue with the flashbacks on the plane though. It felt jumbled together with the random characters’ lives. It was confusing at times as there were so many characters. I was keeping track of each characters; I had two pages full of people’s names. Each character had no real connection to the main character at all or the story as a whole. The only thing that was a connection was that they were on the same crashed plane as the main character. I can see if after the plane crashed, the families of these characters connected to Edward in a more meaningful way.
The writing to me was very distant and cold. I did not feel like I knew exactly what Edward or anyone in the novel was feeling or like an absence of emotion.

I am disappointed as I really thought this novel would be a great read for me. It really fell flat. But there were some things that I enjoyed like the plot itself.