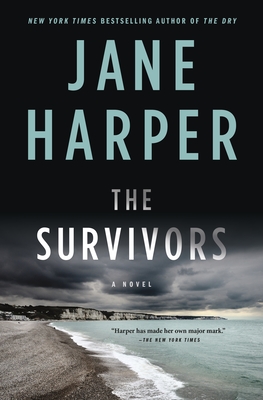 I am giving this book a 5 star review! I really enjoyed everything from the characters, mystery, and setting of this book!

The story centers around two things that happen in a small town in Tasmania. The one event happened a decade before during a storm where 2 people died trying to rescue the main character. And a little girl also died during the same storm. Some, like the little girl’s mother, find her daughter’s death not a simple open and shut case though. Fast forward… we have the same group of people effected by the storm years before together again. A young art student that is new in town dies mysterious on the beach. Cops are called into town to investigate the death of the student. Will they solve the student’s death? Reveal truths or try to make amends of the past events? This is much more than a regular mystery. It is about family, blame, grief, guilt, etc.

I found the characters so much more complex than any story that I have read in a long time. Each character in this story had a story to tell. The main character had so much depth as well. Additionally, the setting was stunning. The author described things so vividly that sometimes it was like I was there! The setting/storm could have been a character too with how much depth it brought to the story. The clues to the final mystery were scattered throughout the book as well.

Needless to say, this will not be the last Jane Harper book that I read!