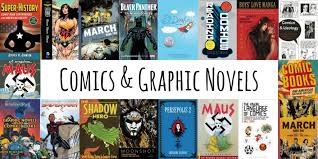 As you can already tell, I read a lot of graphic novels. I do not, however, read comic books. When I show people the Graphic novel that I am reading, the normal reaction is “Why are you reading a comic book?” They are not the same thing at all. Graphic Novels have complex plots and characters as would a novel. Whereas a comic book is a periodical told over several issues spanning months or even years with action center plots. They are most definitely not the same thing. I will be discussing both in detail then providing you with some examples of the Graphic Novels in this blog entry!

Comic Books (CB)- Stories are short (sometimes under 22 pages in length). Does not go into depth with characters but more action centered plots

GN- Story has a beginning, middle, and end- Typically wrapped up in one book

CB- Story is typically periodicals and told over several issues; to be continued to the next issue

GN- Books are bound like a book (glued); printed on better paper and color is more vivid

Examples of Graphic Novels (these are merely examples and not the best of GN):

When I review a graphic novel, it is like a normal book review. The only difference is that I often mention the graphics. Sometimes the graphics and/or the placement of the panels play an important part of my review. I typically place the review on all platforms that I generally place any other novel.

Counting Towards Your Reading Goals:

Yes, I count every Graphic Novel towards my reading goals. I typically read each Graphic Novel as I would a regular novel. Sometimes Graphic Novels take me just as long to read. I like to admire the illustrations but also read the story as I would a typical novel. I knew there will always be people that will never consider this form to be a novel, but I will always count it towards mine!

Drop a comment with your favorite Graphic Novel or Comic Book on this post! Happy Reading, everyone! Thanks for stopping by and reading!

Be the first to comment on "Graphic Novels vs. Comic Books"