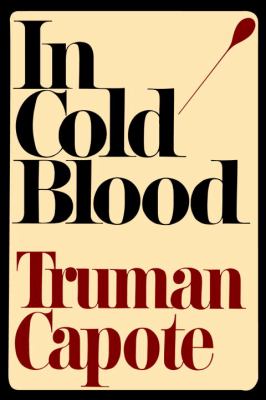 I give Truman Capote a lot of credit. Truman Capote’s writing style is stellar. The characterization in the novel was overly descriptive. The scenes were vivid. The story played out like a fiction novel. He created a new genre of literature. His true crime novel “In Cold Blood” is a truly a classic.

“In Cold Blood” by Truman Capote is a true account of the murder of the Clutter family from a small rural Kansas town. It was senseless as the murderers thought that they were going to score big with the wealthy family but ended up with only a few dollars and 4 people murdered. The novel is split into a few sections; we get a sneak peek of the Clutter family, the crime, the hunt for the killers, and the trial. It reads like a Dateline NBC hour long TV show without the mystery.

All these things are true, but the story did not captivate my attention. (I never rate classics with stars so my review of this novel will have to suffice).

I felt that some of the “characters” were pointless to the overall story. His repetition of facts was annoying to say the least.

This was a true crime novel. It is not a mystery. He did not leave a mystery about who the killers were. I would have enjoyed it a lot more if I (the reader) found out the evidence at the moment that the detectives discovered it. But I understood why he wrote the novel this way. He became obsessed with the murderers and fascinated with why they committed the crimes. Capote was raised in a similar fashion as the one murderer with being raised by divorced parents. This bond can be seen throughout the novel. You can tell Capote was fascinated with the two criminals, because a lot of his time was spent discussing every single aspect of their life before, during, and after the crime was committed. Capote makes me feel sorry for the murderers then brings me back to reality when he discusses their heinous crime. But hearing their side of the story makes me feel sympathetic towards them even in the slightest of ways.

Overall, I can see why people would love this novel. The way Capote writes can be described, to say the least, as superb. This book will stay with me for a long time. You would never be able to tell that this crime was not committed in 2019. If you have a chance, pick up this novel!