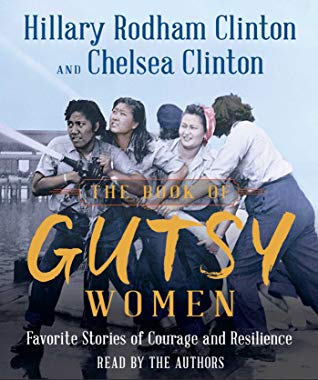 I am giving this book a 3.5 star review for the novel “The Book of Gutsy Women: Favorite Stories of Courage and Resilience” by Hillary Clinton and Chelsea Clinton.

I loved the biographies of all the “Gutsy” women in this book. The history was fascinating. I even found myself reading some of them over again. A lot of the women mentioned in the book are people in the news or historical figures that I knew about already. But a lot of the women mentioned, I had never heard about and loved to read about how they impacted the world we live in now!
The novel included the following chapters:
• Early inspirations
• Education
• Earth Defenders
• Explorers and Inventors
• Healers
• Athletes
• Advocate Activists
• Storytellers
• Elected Leaders
• Groundbreakers
• Women’s Rights
I did not like the commentary from Hillary and Chelsea. It almost was like taking away from the biographies and the “Gutsy Women” that they were talking about in the novel. Both authors would name drop, talk about their personal lives, and/or talk about their careers. I personally felt like it took away from the people that they were honoring in the novel. I can see if the book had these off to the side for you to read or skip over. Additionally, I felt like at times, it was like a college or high school essay, where they would define words that they thought the reader would not understand. I also did not like how they discussed their own political views throughout the novel. I think this took away from the women that they were speaking about and had the spotlight on Hillary and Chelsea. I am surprised that Chelsea did not add Hilary and vice versa for a chapter in the novel.
Overall, I enjoyed the novel and learned a lot about women who made this crazy world that we live in now, a lot better. I learned a lot and found inspiration in many of their stories. Some were brave, courageous, fought for others, etc.

Be the first to comment on "Review of “The Book of Gutsy Women: Favorite Stories of Courage and Resilience” by Hillary and Chelsea Clinton"