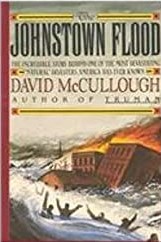 This is a very detailed non-fiction novel about the Johnstown flood. It starts from the before, during, and after the flood there. It was one of the worst disasters in the USA’s history. This tragedy dives into the greed of people and how this tragedy could have been easily avoided. It was owned by the elite of the steel companies in Pittsburgh. They ignored the claims that the dam was damaged.

I wish this book had more pictures of the town and the aftermath. I Googled it after I completed the book to see additional photos of the flood. I would have loved to see more of the newspapers’ headlines too.

This book is very easy to follow. It was a little slow at times. I found a lot of the things repetitive. But overall the facts were interesting.

This novel is very well-written. It flows nicely and follows the events in chronological order. I enjoyed reading about the stories that were not true. I live in western PA and would know how a story can get embellished in a small town rather quickly. I think the story was so big during that time that the gossip and stories just were passed down from one generation to the next. My grandmother always told me a story about the flood that seemed outrageous.

I also liked the fact that there were a lot of quotes from survivors of the flood. It was interesting to read the stories and quotes.

Overall: This is a great book to read if you want to know about the Johnstown Flood. It is interesting to read as the case of the dam breaking was pinned on Andrew Carnegie, Frick, and some other of the elite from Pittsburgh.