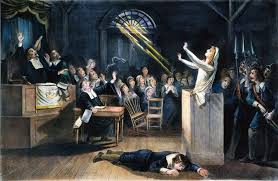 I had a friend who asked me about books for the Salem Witch Trails. I could only name The Crucible. I figured that the books that I found, I should post to my blog!

The Crucible by Arthur Miller

Hour of the Witch by Chris Bohjalian

How to Hand a Witch by Adriana Mather

I, Tituba, Black Witch of Salem by Maryse Conde

The House of Seven Gables by Nathaniel Hawthorne

The Heretic’s Daughter by Kathleen Kent

The Witch of Blackbird Pond by Elizabeth George Speare

The Physick Book of Deliverance Dane by Katherine Howe

A Break With Charity by Ann Rinaldi

The Witches: Suspescion, Betrayal and Hysteria in 1692 Salem by Stacy Schiff

A Storm of Witchcraft: The Salem Witch Trails and the American Experience by Emerson Baker

A Break with Charity: A Story about the Salem Witch Trails by Ann Rinaldi

The Specter of Salem: Remembering the Salem Witch Trails in Nineteethnth Century America by Gretchen Adams

The Salem Witch Trails: A Day by Day Chronicle of a Community Under Seige by Marilynn Roach

The Ozford Encyclopedia of Witchcraft and Magic edited by Owen Davies

Salem Possessed: The Social Origins of Witchcraft by Paul Boyer and Stephen Nissenbaum

The Witch’s Daughter by Paula Brackston

A Delusion of Satan: The Full Story of the Salem Witch Trails by Frances Hill

Be the first to comment on "Salem Witch Trail books"