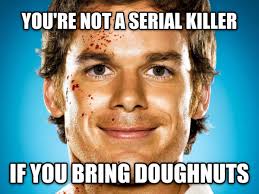 This is a mix of true crime, case studies, and fiction novels.

The Devil in the White City by Erik Larson

I’ll Be Gone in the Dark by Michelle McNamara

The Night Stalker by Philip Carlo

The Stranger Beside Me by Ann Rule

The Monster of Florence by Mario Spezi

If You Tell by Gregg Olsen

The Silence of the Lambs by Thomas Harris

The Search for teh Green River Killer by Carlton Smith

My Sister, the Serial Killer by Oyinkan Braithwaite

I hunt Killers by Barry Lyga

The Alienist by Caleb Carr

Teh Bone Collector by Jeffrey Deaver

The Phantom Prince: My Life with Ted Bundy by Molly Kandall

The Night Stalker by Philip Carlo

The Lovely Bones by Alice Sebold

Kiss the Girls by James Patterson

The Man on the Train: Discovering America’s Most Elusive Serial Killer

The Babysitter: My Summers with a Serial Killer by Liza Rodman and Jennifer Jordan

Jar of Hearts by Jennifer Hillier

Did You Hear What Eddie Gein Done? by Harold Schechter and Eric Powell (Graphic Novel)

Perfume: The Story of a Murderer by Patrick Suskind

The Fourth Monkey by JD Barker

My Lovely Wife by Samantha Downing

The Shining Girls by Lauren Beukes

The Wasp Factory by Iain Banks

I Am Not A Serial Killer by Dan Wells