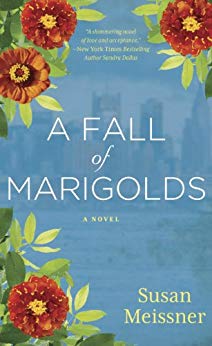 The following is my review for “The Fall of Marigolds” by Susan Meissner. I gave this book a 3.5 star rating. I went back and forth while reading this book with my review. I wanted to love the book, but there were little things that made this book lower in score for me. Although the history was interesting, there were things that lacked.

I am first going to talk about what I liked about this book. I enjoyed the history in this book. It is split between 1911 after the Triangle Shirtwaist Factory Fire in NYC then we follow Clara to Ellis lsland. Then it skips ahead in time to 9/11/01 NYC. We follow Taryn who loses her husband to the terrorist attacks during that fateful day. Both are connected by a marigold scarf. Yes, you heard that correctly. The author also focusses a lot of time showing the similarities of people jumping out of buildings, which I found in poor taste. It is mainly about moving on after a terrible tragedy. Clara (1911) thought that she was in love with a guy that she had met in an elevator 2 weeks prior to his death at the factory. She blames herself for him being on that floor and killed. Taryn loses her husband who she also blames herself that he was in the twin towers that day.

I found the love at first sight with Clara and her obsession a little ridiculous to say the least. They focused on this story way too much. All Clara did was whine about what could have been with a guy that she merely just had a brief encounter with. Taryn’s story was interesting, but the author only chose to have her in only 30% of the novel. What a shame this was as that plot was stronger than Clara’s story line. I also wish there were more connections between the 1911 and 2011 stories as well. I did not like the “forced” way that the author did it. I found some of the connections in poor taste.

The strange thing is that I do not regret reading it. I found some parts of the story interesting, while other parts just lacked. At first, I rated it a 4 star rating. I gave it a lot of thought and decided to rate it 3.5 stars.