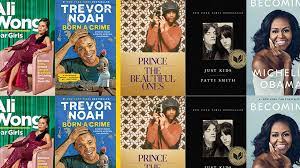 My Life in France by Julia Child

Dreams from My Father by Barack Obama

Life Will Be The Death of Me…And You Too!  by Chelsea Handler

Me by Katherine Hepburn

Stories I Only Tell My Friends by Rob Lowe

In Pieces by Sally Field

They Called Us Enemy by George Takei (Graphic Novel)

The Girl With the Back Tattoo by Amy Schumer

If You Ask Me by Betty White

Scrappy Little Nobody by Anna Kendrick

My Life So Far by Jane Fonda

The Princess Diarist by Carrie Fisher

Fresh Off the Boat by Eddie Huang

By Myself by Lauren Bacall

I’m The One That I Want by Margaret Cho

This is Me Chrissy Metz

This is Just My Face by Gabourey Sidibe

Where Am I Now? By Mara Wilson

In The Country We Love by Diane Guerrero

Inside Out by Demi Moore

Self Inflicted Wounds by Aisha Tyler

Talking As Fast As I Can by Lauren Graham

A Life in Parts by Bryan Cranston

Is Everyone Hanging Out Without Me? By Mindy Kaling

This Will Only Hurt A Little by Busy Phillips

I Must Say: My

Life as a Humble Comedy Legend by Martin Short

Watch Me by Anjelica Huston

There Was A Little Girl Brooke Sheilds

So That Happened by Jon Cryer

A Paper Life by Tatum O’Neal

I, Tina by Tina Turner

Elvis and Me by Priscilla Presley

Call Me Crazy by Anne Heche

The Greatest Love Story Ever Told by Megan Myllally

The beauty of Living Twice by Sharon Stone

No Time For the Future by Michael J. Fox

My Boring-Ass Life by Kevin Smith

Me by Elton John

Hunger Makes Me a Modern Girl by Carrie Brownstein

Born to Run by Bruce Springsteen

Touched By the Sun by Carly Simon

The Dirt by Motley Crue

The Beautiful Ones by Prince

Me by Ricky Martin

More Myself by Alicia Keys

I Feel Bad About My Neck by Nora Ephron

On Writing by Stephen King

Courage To Soar by Simone Biles

One Life by Megan Rapinoe