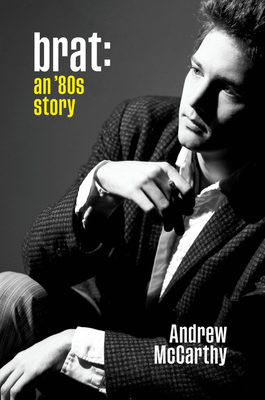 A well-written memoir by Andrew McCarthy of “St. Elmo’s Fire,” “Weekend At Bernies,” and “Pretty in Pink” fame from the 80s.

Andrew McCarthy shot to fame in the 80s as being a member of the “Brat Pack.” He starred in many movies in including “Pretty in Pink” and “St. Elmo’s Fire.” He became a household name right away with the success of these films for young adults. He talks about starting his career and working in the 80s as well as his battle with alcoholism and sudden fame.

I love 80s movies. I grew up in the 80s and early 90s. When I knew this book was to be published, I knew that I needed to get my hands on it! It was very nostalgic for me to go back to the 80s.

This book was just okay. Although Andrew wrote an incredibly well-written memoir, it lacked depth. He barely talked about subjects in the book. You can tell that by the book only being 200 pages. If he would have opened up a bit more about his experiences, this book could have been great. He did not give out any juicy Hollywood gossip or even talk about life after the 80s. If you are looking for a lot of behind-the-scenes information about his movies, this is not the book for you. I would have loved to know more about his alcoholism and recovery or even his relationships/marriages/children. I felt like it was written by a biographer and not Andrew. His complicated relationship with his father was the only real depth that this novel got, in my opinion.

It mainly goes over his early career and coming to terms with his sudden fame within he “Brat Pack.” I would have loved for him to talk about his career today after directing “OITNB.” I did enjoy reading about how the term “Brat Pack” came to be, how it marginalized the actors/actresses, and how they were not as close of the media let on.

Overall, it was still very well-written and nostalgic. You can tell he loves the craft of acting. He spends a lot of time discussing his start of acting and his love for the craft.

Be the first to comment on "Review of “Brat: An 80s Story” by Andrew McCarthy"