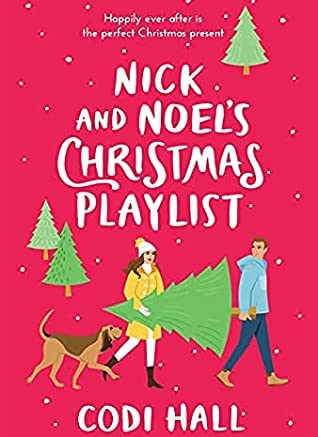 3 more reviews before I am all caught up!!!!!! Then I promise my reviews will get better! 🙂

Nick just returned from the military to his hometown. He goes to see his girlfriend only to find out she is with someone else.

Noel is his best friend and long-time family friend. Noel’s parents passed away and Nick’s family swooped in. She spends the holidays with Nick’s family. Noel has commitment issues due in part of her parents dying.

Noel and Nick are both single and adore each other. They decide to pretend like they are dating to make his ex jealous which results in a kiss. This makes everything complicated. And so it begins… Should they ruin their friendship and Noel chance losing the only family that she has left.

This book was a cute Christmas book. It had cheesy Hallmark movie written all over it. This is exactly what I wanted for over the holidays too! I saw the cover art, and knew what I was picking up!

This is the friends to lovers troupe. It had a ton of family Christmas drama. We got two POVs between Nick and Noel. At first the names all being Christmas themed bothered me, but it grew on me as the book continued. I also wish there was more chemistry between Nick and Noel. I wish they had one or the other kind of pine for each other for years. But it seemed as though it just happened because Nick was vulnerable. The only attraction that I felt was when things got steamy in the book.

This book was a little too long. I think they could have taken out parts to make it a little shorter.

If you want a cute Christmas rom-com with a little spice, then pick up this book.

Trigger warnings: death of parents in a car crash during Christmas (I lost my father in the same way and time. It really effected me).