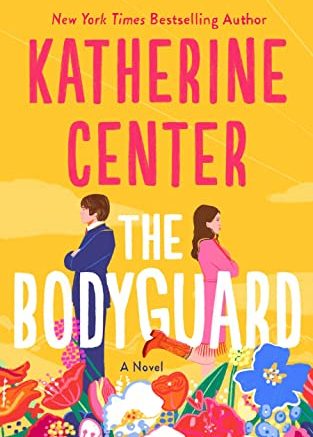 Hannah works for a security firm. They send her all over the world on security jobs. After her mother dies, her boyfriend dumps her. She is also assigned to a case that is in Texas. She is used to traveling for work. She is assigned to a famous actor, Jack Stapleton. He currently has a woman who is stalking him. His mother is sick, so he must return home. But after an accident, his family is not too keen in having Jack at home. Jack does not want his family to know that he has a security guard. He asks Hannah to pretend that she is his girlfriend.

Katherine Center is becoming one of my go-to authors! I always know that when I read a book by her, I will just love it! This book was no different. I was so happy to get approved for this arc through Netgalley!

The characters are cute. I really loved both Hannah and Jack. I also loved Jack’s family. It was crumby of her boyfriend (at the beginning of the novel) to dump her right after her mother passed away. I wanted to give Hannah a huge hug. You could tell she was dealing with a lot of emotions.

I think it was nice to see that two characters that are going through their own problems but also bonding over them too. With Hannah losing her mother and Jack losing his brother, we got to see how both are dealing with the grief in their own ways.

POSSIBLE SPOILER: I really liked the ending too. I knew that eventually there would be an action scene where she needs to be a security guard. I really enjoyed how it all played out.

I also liked the setting. Not only was Hannah out of her element on the ranch but also in nature. She is used to living in the city. It had me laughing from time to time. When you think of Texas, you think it is all people who can hunt, have big trucks, etc. You do not think of a city slicker from Texas! It was all just too cute!

I also loved that a female character was working in a male-dominated field. She also held her ground among the men that she worked with and for. Katherine Center did not portray her as being “manly.” Normally they like to stereotype a woman to be butch in media when a woman portrays a construction worker, cop, etc.

Every step of the way, I kept comparing this book to the two Sandra Bullock movies called “The Proposal” and “Miss Congeniality.” “The Proposal” was similar due to the fake relationship with a co-worker and meeting the family in a state where she is out of her element. But also Miss Congeniality due to the security guard/cop and action scene. I would love to see Sandra Bullock play Hannah in the movie! HA