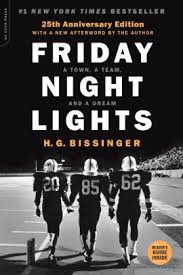 The Blind Side by Micheal Lewis

The Game: Harvard, Yale, and America in 1968 by George Howe Colt

Paper Lion: Confessions of a Last-String Quarterback by George Plimpton

When the Men Were Gone by Marjonie Herrera Lewis

Belichick: The Making of the Greatest Football Coach of all Time by Ian O’Connor

Be the first to comment on "Super Bowl Sunday: American Football books"