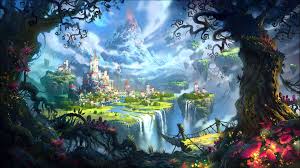 Fantasy novels are everywhere! I am going to break down some fantasy genres.

Fantasy is a genre of novels that features magical and supernatural elements that do not exist in the real world. Some may be in real world settings whereas others in new universes.

Some of the subgenres of fantasy include:

I am going to briefly explore these. This is ONLY a beginners guide to fantasy. There are so many subgenres of this genre that I am not going to touch on.

High or Epic Fantasy are novels that are set in magical settings that has its own rules and physical laws. The plots and themes have a grand scale and typically center around one well-developed hero.

Lord of the Rings by J.R.R. Tolkien

The Chronicles of Prydain by Lloyd Alexander

The Chronicles of Thomas Covenant by Stephen R. Donaldson

The Belgariad by David Eddings

Low Fantasy are novels that are set in the real world. They typically contain unexpected magical elements that shock characters about the magic.

The Indian in the Cupboard by Lynne Reid Banks

Magical realism is when a novel mixes realistic narrative with surreal elements of dream and fantasy. These novels tend to make you question what is “real” and how we can tell that they are real. These novels are not either/or so to speak but more of both at once. Take for instance telekinesis or levitation.

Some examples of magical Realism are:

One Hundred Years of Solitude by Gabriel Garcia Marquez

The Ocean oat the End of the Lane By Neil Gaiman

Lincoln at the Bardo by George Saunders

The Water Dancer by Ta-Nehise Coates

Sword and Sorcery is a subset of high Fantasy. It focusses on sword-wielding heroes. It can have magic or witchcraft in these novels

Fafhrd and the Gray Monster by Fritz Leiber

Dark Fantasy is when a novel combines elements of fantasy and horror. It is supposed to frighten readers.

The Citadel of Fear by Gertrude Barrows

The Black Company by Glen Cook

Fairy Tales are typically set in distant magical worlds where there could be trolls, dragons, witches, and other supernatural characters.

Superhero Fiction is where a hero acquires special abilities through scientic or supernatuiral means.

There are so many more genres and subgenres to explore with fantasy. I am NOT an expert on this genre whatsoever. I do tend to pick up a fantasy novel from times to time though.

Be the first to comment on "Beginners Guide to Fantasy Novels"